Skip to content
Metal on Metal Hips: When should our patients be concerned?

Metal on Metal Hips: When should our patients be concerned?

I’ve worked in the world of hips for many years, and I can certainly recall the time when we would recommend hip resurfacing arthroplasty to patients.

I confess I have always had a little bit of an uneasy feeling about metal on metal. It seems, well, a little bit iffy the idea of two metallic surfaces articulating tightly together. For several years now, we have seen the unravelling disaster of metallosis. A sort of metallic MSK dry rot. It’s seriously bad news, and the irreversible damage caused to tissues means it’s become the orthopaedic equivalent of Japanese knotweed.

Many metal on metal hip resurfacings and total hip replacements have been put into patients. Are they all now sitting on ticking time bombs?

Not all patients are going to go on to find themselves in hot water, but many will.

So when should we be concerned about such patients and when should we consider it une tres bonne idée to revise a metal on metal hip, to an implant such as a ceramic one?
The medicines and healthcare procedures regulatory agency (MHRA), issued on the 29th June some updated advice regarding the follow-up of metal on metal hip resurfacing and metal hip replacement patients. It’s a chewy read, which probably bypassed the ‘Crystal Mark’ English department.

So I thought I’d have a go at summarising it.

To put a bit of context around this, if you have a symptomatic patient who has a metal on metal hip resurfacing and you want to investigate them, you have three ways of looking into it more:

When it comes to blood tests, levels of metal ions such as cobalt and chromium can be used to assess a trend. When a metal on metal prosthesis wears, ion levels tend to increase. Levels of cobalt ions > 119 nmol/L or chromium ions >134.5 nmol/L, or total ion levels of >7 ppb mean it’s definitely time to do some scanning.

Once the metal on metal resurfacing or the total hip replacement has been put into a patient, the ion levels at the time of surgery will be high. These should fall over the following years. If they are increasing, then we’ve maybe got something to worry about. There isn’t a finite level which indicates the hip should be revised to a different prosthesis, and it’s all about keeping an eye on these levels and the patient’s symptoms. MRI scans and Ultrasound scans should absolutely carry more weight in decision making than blood tests alone.

MARS protocol MRI scanning–sadly this doesn’t involve chocolate, but it does stand for “Metal Artefact Reduction Sequence”. It’s done on a lower powered MRI scanner such as a 1.5 Tesla and it helps reduce the distortion or scatter of the magnetic field. A regular MRI sequence would otherwise give you blurry black blobs on the imaging. 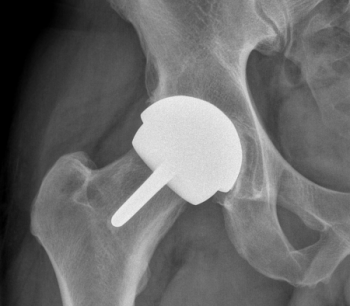 So why do these metal on metal resurfacings and replacements tend to wear so quickly?

Some of the prostheses such as those made by DePuy had shallow acetabular cups, and many also had a bit of a “wobble” at the junction where the neck fitted into femoral head component. All of this adds up to what’s called ‘greater edge loading’. This basically means early wear of the anterior, superior aspect of the prosthesis.
Metal on metal wear creates metallic debris, and this, unfortunately, excites white blood cells. It’s thought that the T lymphocytes can get into a bit of a frenzy, and then they also switch on macrophage cells which decide to get the munchies. These flock together in so-called pseudo-tumour masses and we see the end result which is degradation of soft tissue and bone.

It’s all a bit nasty really.

A metal on metal hip which is being revised, looks like it has taken a visit from a rather messy chimney sweep.

So, which patients should we be following up and screening?

Ideally, patients will, for a time, be followed up annually after they have had a total or a resurfaced hip, but we know that patients have the funny habit of dropping out of insurance systems and generally leaving to go and live in other countries. Why wouldn’t ya?

If you’ve a patient who has had a metal on metal resurfacing or total hip arthroplasty, listen up!

Firstly, if your patient is female and she has a metal on metal resurfacing, it doesn’t matter if she is symptom-free or symptomatic, she needs an annual follow-up in an orthopaedic outpatient clinic.

There, they will carry out an ‘Oxford hip score’ assessment, which is basically a symptomatic and functional score of how well the hip is serving the patient, and they’ll measure whole blood metal ion levels. If either of these show adverse findings, then it’s time for a trip in the MRI scanner. If there are signs of metallosis or impending doom in the imaging, this adds weight to the decision to move towards the arthroplasty being revised.

If either of these show adverse findings, then it’s time for a trip in the MRI scanner. If there are signs of metallosis or impending doom in the imaging, this adds weight to the decision to move towards the arthroplasty being revised.

If the owner of the arthroplasty is a chap, you’ll need to find out if it’s a resurfacing. If it is, and the femoral head diameter is < 48mm, or, if it’s a DePuy ASR hip resurfacing, then your chap needs a similar process of follow-up as for the gals.

Anyone who has a metal on metal total hip replacement with a femoral head diameter is < 36mm needs to go through the same process.

Are you keeping up with me?

If they are asymptomatic, they need to be followed up annually for the first 5 years.

The key issue here is that your patient needs to know what device they have got on board.

Let’s face it, many patients don’t have a Scooby Doo.

If they’re not sure, then someone needs to do a little Inspector Clouseau work, and maybe even find out from the nice surgical person who popped it in in the first place.

Patients who are symptomatic tend to have similar symptoms that led them to have the surgery in the first place.

Don’t be fooled by thinking they might have a groin strain, psoas overload, or a bit of an adductor issue. If they’ve one of the bad boys onboard, it needs checking out.

You could be saving your patient from a disastrous outcome.

We’re making 2017 the year of injury education. We want to raise awareness about sport injury management and prevention, for patients and clinicians alike.

Let’s get in touch!