You may have Iliotibial Band Friction Syndrome (aka IT Band Syndrome). Don’t struggle on, there’s lots that we can do to help.

What is IT Band Syndrome?

The IT band is a long gristle band that connects your gluteal muscles to an area below your knee.

It helps stabilise the knee when we’re moving and it probably stores and releases elastic energy when we’re running to make our running and strive more economical.

There are a lot of myths around the iliotibial bands, such as it’s ‘too short’ or ‘too tight’. And in fact, it often tends to become dysfunctional when there are imbalances around the hip and postures that can affect its function.

There’s a bursa that separates the band from the bone and increased friction in the area, caused by poor biomechanics and gait can lead to the classic pain on the outside of the knee we call IT band friction syndrome.

What are the symptoms of IT Band Syndrome?

You’ll probably notice (if you have this problem), that there was an occasion when you started to experience pain, either after a run or towards the end of a run.

Sometimes it can come on at the exact same time into a run as if your knee knew what mileage you’d done. If you press on with running, you may find that you have pain even when you’re not running and it might become quite uncomfortable even if you’re sat for a while.

What causes IT band syndrome?

Although it’s not exclusive to runners, we mostly see this problem of runners and triathletes. They can also happen in cyclists and people who do a lot of squatting activities. Generally speaking, it’s a combination of poor biomechanics, areas in training, and flexibility issues.

Training areas can include a poor running gait, doing a lot of downhill running, running on uneven terrain and in cambers, and doing too many hill sessions when you’re not conditioned for it. If you’re a cyclist and you’re tending to be a bit ‘in-toed’ when cycling, this can also cause IT band issues.

Most of the problems we see relate to running when people have an excessive anterior pelvic tilt with poor action or timing of the glutes. You might notice that you tend to drop in at the knee when you’re running. Physios may point out to you that your tensor fascia lata muscle is mechanically short or tightened, and that you’re not firing at the glutes well. 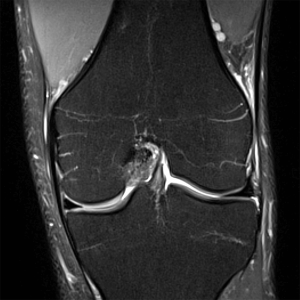 How do we diagnose Iliotibial Band Syndrome?

When you come to clinic, I’ll be asking you questions about how you experience pain, and we’ll examine you in terms of how you move and run. There are occasions when a problem with your lateral meniscus in the knee can mimic Iliotibial Band Syndrome, so it’s important to get it properly assessed.

Do we need to do some imaging of my knee?

Occasionally an MRI scan may be necessary to rule out other conditions that can masquerade as Iliotibial Band Syndrome, such as a lateral meniscal tear or bone stress in the femoral condyle. Sometimes instability in the superior tibia fibula joint can also mimic this. Occasionally people have a problem with the hamstring and at the insertion.

Simply stretching and foam rolling on your it band is not going to correct the abnormal biomechanics that is generating the problem.

Most people will improve with the advice and direction of an excellent running physiotherapist or running osteopath.

You may need to initially rest a little bit, abstain temporarily from running to bring the irritation down. Very occasionally we might have to carry out ultrasound-guided steroid injection to get things, to settle as efficiently, but the most important thing is going to be, to be correcting the strength deficiencies, especially in the glutes, and retraining your gait.

Sometimes we might need to consider the input from a podiatrist. If you’ve got significant overpronation issues. And if you’re struggling to progress on with an ITB problem, please don’t hesitate to book a consultation.