What is hip arthritis (osteoarthritis)?

Suprised to learn you might have osteoarthritis in your hip?

“Aren’t I too young to have arthritis?” is a phrase I regularly hear in my clinic.

Hip osteoarthritis (aka ‘OA’ or wear-and-tear arthritis) is very common, and not just in the elderly. In the UK, one in nine people over the age of 45 has hip arthritis. It’s a little more common in women than in men, and you’re more likely to get hip OA if another member of your family has it.

Osteoarthritis of the hip is a process whereby the shiny, articular cartilage that covers the ball (head of femur) and lines the socket (acetabulum) wears down, exposing the bone underneath.

Hip arthritis can happen to anyone, but it’s more likely to occur, the older you get. Nevertheless, the UK’s population is more active than our parents’ generation, and which means we’re seeing hip arthritis occur increasingly more commonly in younger age groups.

Many of the cases we see of hip arthritis occur because of increased wear in a hip joint that wasn’t perfectly formed. FAI (femoroacetabular impingement) can pre-dispose to hip OA, and it’s thought that 10% of hip OA patients develop their arthritis because they’ve had hip dysplasia (when the hip socket doesn’t form correctly).

Professional sports men and women are more likely to develop hip arthritis, and it’s more common if you’ve ever had trauma to your hip,

Thankfully, for those of us who are runners, there doesn’t seem to be an increase in hip OA occurrence, which may in part be explained by running helping to prevent weight gain in middle age.

What are the symptoms of hip osteoarthritis?

Many people are mistaken in thinking that their hip joints are in the area where you put your hands on your hips, when in fact, the joints are deep in your groin.

If you’re developing hip arthritis, you may experience pain in your groin, but sometimes it can radiate around the hip (in a ‘c’ shape), and you may feel it extending into your thigh (quads area) and even your knee.

In the early stages, you might find that sitting irritates your hip, or when you’re getting up out of a chair, or getting out of the car. You might find your hip feels better when you start moving, but if you do too much activity, it will protest!

As the hip joint wears, it will often become stiffer, and the range of movement will decrease. Initially, it’s often the rotation of hip that starts to change, and when you’re lying flat on your bed, you may notice that your foot is turned out more (think Charlie Chaplin).

Certain positions in sport or yoga might become difficult or uncomfortable, and bending forward to put your shoes and socks on, awkward.

Many of my patients are unaware that they are limping until somebody points it out to them. Sometimes a member of the family will remark that your walking has slowed down, or that you’re failing to keep up.

Some hips become so worn that they begin to feel like they’re grinding, and this might even be audible.

Surely this can’t have happened so quickly?

Hip arthritis can arrive upon us surprisingly rapidly. Why does this happen?

When the hip wears, we lose the articular cartilage which enables the joint surfaces to glide beautifully on each other.

The frictional forces then escalate in the hip, creating further wear, pain and stiffness. This can happen in a matter of months (and in my own experience, I went from ironman and marathons to a painful shuffle, in less than two years). 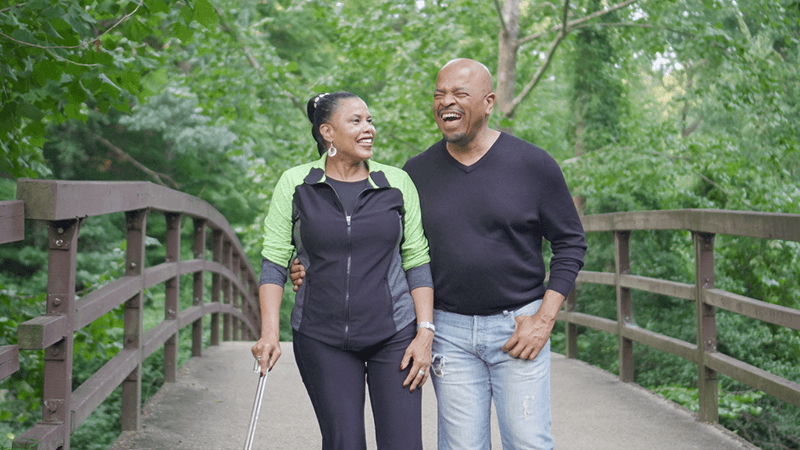 How is Hip Osteoarthritis diagnosed?

Sometimes a patient might have a hip that is so stiff and painful, we can be pretty confident that arthritis is the issue without any tests. However, we carry out diagnostic tests to look for the degree of wear, to rule out other conditions such as ‘avascular necrosis’ and to help guide treatment.

It’s perfectly possible to confirm the diagnosis of a good-going case of hip arthritis on an x-ray, but in the early stages, an MRI scan can be very useful in determining the extent of the arthritis, and looking at how the soft tissues are the hip are holding up. 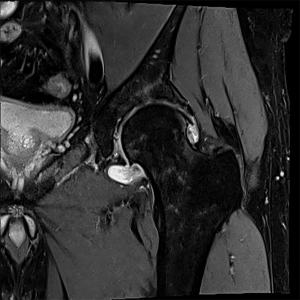 What is the treatment for Hip osteoarthritis?

Hip arthritis is a condition going in one direction – in other words, it’s not a condition that will recover, but in the early stages there is a good deal that can be done to get you comfortable and moving better.

Physiotherapy (and osteopathy) can be helpful to help you to optimise your movement and muscle conditioning (as best as possible), and anti-inflammatory medications can ease discomfort and help you feel less ‘stiff’. Adapting your exercise to reduce what makes you uncomfortable will help to some degree (e.g. swapping running for cycling).

Corticosteroid injection treatment can be helpful if you really need some pain relief and to ‘buy a bit of time’, but it’s not a long term fix, and it’s worth remembering that most surgeons would avoid operating on a person who’s had a hip injection, for up to six months.

Many claims are made about so-called miracle cures for hip arthritis, such as stem cell therapy and PRP (platelet rich plasma), but the lack of robust clinical evidence means I can’t support their use (and health insurers don’t cover the cost of these treatments either). Osteoarthritis is a disappearing act of the joint surface, and essentially it becomes a true, structural problem.

Eventually, for many people, their symptoms may warrant hip replacement surgery.

I had been working with a great physio for a few months, on what I thought was a groin strain but turned out to something else. The exercises were making a difference, but any sudden jarring movements would put me back to square one again. To continue my insurance cover, and to make sure we were on the right track with treatment, he recommended I see Cath.

Meeting Cath has been an absolute pleasure. She is so welcoming and makes you feel instantly relaxed. We chatted about the circumstances that lead me to her door and what my symptoms were. We did some physical tests and then Cath had a look a recent CT scan I’d had that happened to include my hips.

Cath is a very straight talker, she told me as much in our meeting, and she does it in the most positive way. “Well, I’d like to send you for an MRI to get more detailed images, but I may as well tell you now It’s not a strain, you basically need a new hip!” It was a bit of a surprise I admit, but Cath is so friendly and reassuring my only answer was to laugh and say “Oh…OK”.

Cath then explained what she thought the real problem was. I went for an MRI which came back and confirmed exactly what she had thought. Cath talked me through the images, explained what caused the problem and then asked what I would like the outcome of any treatment to be. She has recommended a surgeon she rates highly for the procedure and gave me a rough outline of what to expect going forward.

I can honestly say this has been the most refreshing and enjoyable Doctor / Patient situation I have ever had. Cath’s open and friendly manner is backed up by years of experience, and an obvious enjoyment of what she does. And you don’t even have to be into sports! I cannot recommend her highly enough.

Let’s start with the good news. The results from hip surgery are excellent – 92% of patients are delighted with their hip replacement at one year.

Let’s move on to the even better news. These days, hip replacements last a really long time. You can expect a good 25 years out of your new hip, which is why we should forget the notion that you should hang on for as long as possible before you have a new hip.

Even if you succeed in wearing your hip replacement out, replacing the replacement (known as revision surgery), is perfectly possible.

What about hip ‘resurfacing’ surgery?

Anyone who’s been working in the world of hips as long as I have, will have closely followed the journey of ‘hip resurfacing’ – a kind of surgery where the joint surfaces are replaced with metal-on-metal components.

Would I ever recommend that a patient considers this kind of surgery? I’m going to say ‘no’, and here’s why:

I can recall the messaging around resurfacing surgery being all about minimising the amount of bone loss, because the head of the femur isn’t removed – it’s, well, resurfaced.

However, a good deal of bone needs to be removed from the socket side of the joint in order to make space for a very large metal cup that pairs up with the resurfaced femoral head. That’s not great news when the resurfacing wears out, and then revising it to a total hip replacement becomes potentially more complicated.

Modern day total hip replacements offer a truly excellent range of movement, and in my many years of working in the hip world, my experience is that resurfaced hips aren’t any better in their range of movement.

Hip resurfacing is are banned in the NHS because resurfaced hips tend to fail early (so why would you offer them in the private sector?)

And finally, and most importantly of all, the metal on metal articulation of a resurfaced hip can lead to metal debris building up in the joint. This has a toxic and irreversibly damaging effect on the muscles and soft tissues around it.

Concerned you might have hip arthritis? Book a consultation